From Wikipedia, the free encyclopedia
Jump to: navigation, search 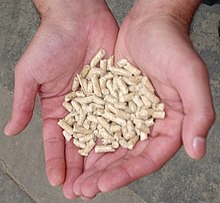 Pellet fuels are heating fuels made from compressed biomass. Wood pellets are the most common type. A form of wood fuel, wood pellets are generally made from compacted sawdust or other wastes from sawmilling and other wood products manufacture,.[1] Other woody biomass sources include palm kernel shell, coconut shell, and whole-tree removal or tree tops and branches leftover after logging and which otherwise help replenish soil nutrients.[2] As well grasses can also be pelletized, creating grass pellets. Pellets are manufactured in several types and grades as fuels for electric power plants, homes, and other applications in between.[3] Pellets are extremely dense and can be produced with a low moisture content (below 10%) that allows them to be burned with a very high combustion efficiency.[4]

Further, their regular geometry and small size allow automatic feeding with very fine calibration. They can be fed to a burner by auger feeding or by pneumatic conveying. Their high density also permits compact storage and rational transport over long distance. They can be conveniently blown from a tanker to a storage bunker or silo on a customer's premises.[5]

A broad range of pellet stoves, central heating furnaces, and other heating appliances have been developed and marketed since 1993.[citation needed] With the surge in the price of fossil fuels since 2005, the demand for pellet heating has increased in Europe and North America, and a sizable industry is emerging. According to the International Energy Agency Task 40, wood pellet production has more than doubled between 2006 and 2010 to over 14 million tons.[6] In a 2012 report, the Biomass Energy Resource Center says that it expects wood pellet production in North America to double again in the next five years.[7]

Pellets are produced by compressing the wood material which has first passed through a hammer mill to provide a uniform dough-like mass.[8] This mass is fed to a press where it is squeezed through a die having holes of the size required (normally 6 mm diameter, sometimes 8 mm or larger). The high pressure of the press causes the temperature of the wood to increase greatly, and the lignin plasticizes slightly forming a natural "glue" that holds the pellet together as it cools.[4]

Pellets can be made from grass and other non-woody forms of biomass that do not contain lignin: distiller's dried grains (a brewing industry byproduct) can be added to provide the necessary durability.[9] A 2005 news story from Cornell University News suggested that grass pellet production was more advanced in Europe than North America. It suggested the benefits of grass as a feedstock included its short growing time (70 days), and ease of cultivation and processing. The story quoted Jerry Cherney, an agriculture professor at the school stating that grasses produce 96% of the heat of wood and that "any mixture of grasses can be used, cut in mid- to late summer, left in the field to leach out minerals, then baled and pelleted. Drying of the hay is not required for pelleting, making the cost of processing less than with wood pelleting."[10] In 2012, the Department of Agriculture of Nova Scotia announced as a demonstration project conversion of an oil-fired boiler to grass pellets at a research facility.[11]

Rice-husk fuel-pellets are made by compacting rice-husk obtained as by-product of rice-growing from the fields. It also has similar characteristics to the wood-pellets and more environment-friendly, as the raw material is a waste-product. The energy content is about 4-4.2 kcal/kg and moisture content is typically less than 10%. The size of pellets is generally kept to be about 6mm diameter and 25mm length in the form of a cylinder; though larger cylinder or briquette forms are not uncommon. It is much cheaper than similar energy-pellets and can be compacted/manufactured from the husk at the farm itself, using cheap machinery. They generally are more environment-friendly as compared to wood-pellets.[12] In the regions of the world where wheat is the predominant food-crop, wheat husk can also be compacted to produce energy-pellets, with characteristics similar to rice-husk pellets.

A report to the Massachusetts Department of Energy Resources estimates the energy required to manufacture and transport pellets is less than 2% of the energy content of the pellets.[4] An environmental impact assessment of exported wood pellets, by the Department of Chemical and Mineral Engineering, University of Bologna, Italy and the Clean Energy Research Centre, at the University of British Columbia, published in 2009, concluded that the energy consumed to ship Canadian wood pellets from Vancouver to Stockholm (15,500 km via the Panama Canal), is about 14% of the total energy content of the wood pellets.[13]

Pellets conforming to the norms commonly used in Europe (DIN 51731 or Ö-Norm M-7135) have less than 10% water content, are uniform in density (higher than 1 ton per cubic meter, thus it sinks in water)(bulk density about 0.6-0.7 ton per cubic meter), have good structural strength, and low dust and ash content.[3] Because the wood fibres are broken down by the hammer mill, there is virtually no difference in the finished pellets between different wood types.[citation needed] Pellets can be made from nearly any wood variety, provided the pellet press is equipped with good instrumentation, the differences in feed material can be compensated for in the press regulation.[citation needed]

Pellets conforming to the European standards norms which contain recycled wood or outside contaminants are considered Class B pellets.[3] Recycled materials such particle board, treated or painted wood, melamine resin-coated panels and the like are particularly unsuitable for use in pellets, since they may produce noxious emissions and uncontrolled variations in the burning characteristics of the pellets.[citation needed]

Standards used in the United States are different, developed by the Pellet Fuels Institute and, as in Europe, are not mandatory.[citation needed] Still, many manufacturers comply, as warranties of US-manufactured or imported combustion equipment may not cover damage by pellets non-conformant with regulations.[citation needed] Prices for US pellets surged during the fossil fuel price inflation of 2007–2008, but later dropped markedly and are generally lower on a per-BTU basis than most fossil fuels, excluding coal.

Regulatory agencies in Europe and North America are in the process of tightening the emissions standards for all forms of wood heat, including wood pellets and pellet stoves. These standards will become mandatory, with independently certified testing to ensure compliance.[14][15] In the United States, the new rules are expected to be issued by November 2013.[16] The American Lumber Standard Committee will be the independent certification agency for the new pellet standards.[17]

Pellet baskets allow a person to heat their home using pellets in existing stoves or fireplaces.[19] 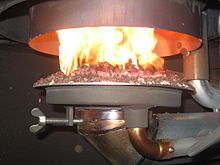 High-efficiency wood pellet stoves and boilers have been developed in recent years, typically offering combustion efficiencies of over 85%.[22] Wood pellet boilers have limited control over the rate and presence of combustion compared to liquid or gaseous-fired systems; however, for this reason they are better suited for hydronic heating systems due to the hydronic system's greater ability to store heat.[citation needed] Pellet burners capable of being retrofitted to oil-burning boilers are also available.[5]

Emissions such as NOx, SOx and volatile organic compounds from pellet burning equipment are in general very low in comparison to other forms of combustion heating.[23] An additional consideration, though, is such air pollutant emissions caused in producing the energy used to manufacture pellets. A recognized problem is the emission of fine particulate matter to the air, especially in urban areas that have a high concentration of pellet heating systems or coal or oil heating systems in close proximity. This PM2.5 emissions of older pellet stoves and boilers can be problematic in close quarters, especially in comparison to natural gas (or renewable biogas), though on large installations electrostatic precipitators, cyclonic separators, or baghouse particle filters can control particulates when properly maintained and operated.[24]

There is uncertainty to what degree making heat or electricity by burning wood pellets contributes to global climate change, as well as how the impact on climate compares to the impact of using competing sources of heat.[4][25][26][27] Factors in the uncertainty include the wood source, carbon dioxide emissions from production and transport as well as from final combustion, and what time scale is appropriate for the consideration.[4][25][28]

A report[4] by the Manomet Center for Conservation Sciences, "Biomass Sustainability and Carbon Policy Study" issued in June 2010 for the Massachusetts Department of Energy Resources, concludes that burning biomass such as wood pellets or wood chips releases a large amount of CO2 into the air, creating a "carbon debt" that is not retired for 20–25 years and after which there is a net benefit.[4] In June 2011 the department was preparing to file its final regulation, expecting to significantly tighten controls on the use of biomass for energy, including wood pellets.[29][dead link] Biomass energy proponents have disputed the Manomet report's conclusions,[30][31] and scientists have pointed out oversights in the report, suggesting that climate impacts are worse than reported.[25][32]

Until ca. 2008 it was commonly assumed, even in scientific papers, that biomass energy (including from wood pellets) is carbon neutral, largely because regrowth of vegetation was believed to recapture and store the carbon that is emitted to the air.[33] Then, scientific papers studying the climate implications of biomass began to appear which refuted the simplistic assumption of its carbon neutrality.[28][34] According to the Biomass Energy Resource Center, the assumption of carbon neutrality "has shifted to a recognition that the carbon implications of biomass depend on how the fuel is harvested, from what forest types, what kinds of forest management are applied, and how biomass is used over time and across the landscape.”[24]

In 2011 twelve prominent U.S. environmental organizations adopted policy setting a high bar for government incentives of biomass energy, including wood pellets. It states in part that, "[b]iomass sources and facilities qualifying for (government) incentives must result in lower life-cycle, cumulative and net GHG and ocean acidifying emissions, within 20 years and also over the longer term, than the energy sources they replace or compete with."[35]

The wood products industry is concerned that if large-scale use of wood energy is instituted, the supply of raw materials for construction and manufacturing will be significantly curtailed.[4][36]

Due to the rapid increase in popularity since 2005, pellet availability and cost may be an issue.[37] This is an important consideration when buying a pellet stove, furnace, pellet baskets or other devices known in the industry as Bradley Burners.[38] However, current pellet production is increasing and there are plans to bring several new pellet mills online in the US in 2008–2009.[39]

The cost of the pellets can be affected by the building cycle leading to fluctuations in the supply of sawdust and offcuts.[40]

In the EU, the largest users of wood pellets are the UK, Denmark, the Netherlands, Sweden, Germany, and Belgium.[41]

The total sales of wood pellets in New Zealand was 3–5,000 tonnes in 2003. Recent construction of new wood pellet plants has given a huge increase in production capacity.[42]

When small amounts of water are added to wood pellets they expand and revert to sawdust. This makes them suitable to use as a horse bedding.[44] The ease of storage and transportation being additional benefits over traditional bedding. However some species of wood, including walnut, can be toxic to horses and should never be used for bedding.[45]